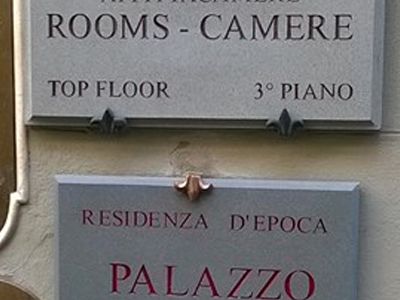 The Palazzo Riblet Historical Residence is situated on the first floor of a stately sixteenth century palazzo which has been renovated several times over the years, but mainly during the second half of the nineteenth century when Florence was the capital of Italy.

Since the Residence fully satisfies the historical-artistic requisites, it is classified as a building subject to the restrictions imposed by the Ministry of the Cultural Heritage and Activities and Tourism, also because of its architectural characteristics, the splendid frescoes in one of the rooms and the spacious loggia (with depictions of the four seasons).

From the main doorway there is access to an elegant nineteenth century sandstone staircase that connects the various floors. The Palazzo Riblet Historical Residence is on the first floor, while at the end of the stairwell on the third floor, there is a large panel depicting “Vigilance” accompanied by symbols and inscriptions.

The present-day name of the palace originates from the Riblet family, a wealthy and aristocratic French family who acquired the property in the early nineteenth century and remained its owners up until a few years ago. We have named the three rooms Paolina, Elisa (who chose a member of the Riblet family as her lady companion) and Carolina, as a tribute to the three Bonaparte sisters and therefore to the Napoleonic heritage of the entire Palace.

The accommodation structure is in Palazzo Riblet, a historical building that once belonged to this wealthy and aristocratic French family who became its owners in the early XIX century. Auguste Riblet (1841 – 1910) was an important antique dealer, a friend of Stefano Bardini and advisor of major European collectors. His son Fernand (1872 – 1944) was a pupil of the Florentine Giovanni Fattori and of Leon Bonnat, one of the leading Parisian exponents of transalpine Verism. The palace remained in the hands of the Riblet family until the death, in 2011, of the last heir, Countess Angela Franca Riblet-Bargagli-Petrucci.

Palazzo Riblet-Bargagli-Petrucci is in Via della Scala, near Santa Maria Novella, inside the ancient city walls of Florence. The street is named after the former Hospital of Santa Maria della Scala, founded in this area for religious and charitable purposes at the beginning of 1300.

From the main entrance there is access to an elegant nineteenth century sandstone staircase that connects the various floors and to a corridor on the ground floor leading into the garden at the back planted with low shrubs and white gravel. The most important decorations in the Palace were executed by the painter Annibale Gatti, between 1840 and 1860, and represent the figurative culture of historical Painters, who were active in Florence around the middle of the century. The many pictorial works in the building include a Vigilance, painted in the large panel above the stairwell, and the Four Seasons, in octagons surrounded by monochrome floral elements in the blind loggia overlooking the garden. In the years when Florence was the capital of Italy (1861-1875), many buildings in Via della Scala underwent important reconstruction work and architectural changes which can still be seen. In particular, while preserving its sixteenth century structure, documented since 1594, Palazzo Riblet-Bargagli-Petrucci is appreciated for its splendid façade and ceremonial staircase - interventions undertaken in the nineteenth century which make it one of the finest examples of architecture within the UNESCO area of Florence.